What is happening:
At the point after I retrieved the book from Quicksand and I'm suppose to return it to Loadsa, I get told everything is okay and new version is out and I can keep that one I have on hand. At this point the quest neither proceeds or gets marked as complete.
As a second note, another one of the tasks that also occurs after getting the book from Quicksand is to talk to Purple Rain, but speaking to him also does nothing.

What should be happening:
The quest should move on after speaking to Loadsa

Steps to reproduce the issue:
Get to the point in "We'll Fix It In Post" quest after you obtained the book from Quicksand and attempt to do the remaining tasks on it.

Screenshots:
This first screenshot shows how the quest log looks after speaking to Loadsa 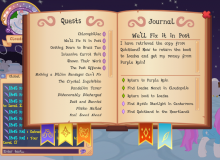 This second screenshot shows that Purple Rain is active even though speaking to him does nothing.

This issue should be fixed after the next server reset. Thanks for the report!