NPC clones self when in Combat
Closed, ResolvedPublic
Actions

Game client version:
Give the name of the archive from which you got this version
OAR Release? Build: v 0.1.8
Reproduced by:
Forum name of anyone having reproduced this issue, if any
N/A
Reproduced on:
List of operating systems this issue has been reproduced on, including their version number if available, and their architecture (32 bit or 64 bit)
Microsoft 64 bit
Crash logs or exceptions generated:
If applicable, give a link to an archive containing the crash logs generated, or copy/paste exceptions you got related to this error
N/A
Screenshots:
If applicable, give a direct link to screenshots/GIFs/videos of the issue, annotated to show exactly what's going wrong
N/A 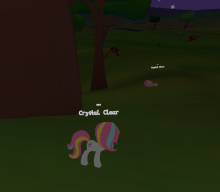 It happening because Crystal Clear is being fainted so a new "Crystal Clear" NPC takes her place, this can be rapid if some reason she keeps fainting rapidly when respawning.