What is happening:
(Sorry, edit to show this seem to only happen to Cuckoo Lande at this time)

Name tag of the cuckoo land can be seen in dialog also that she vanish in it.

What should be happening:
Shouldn't be able to see their name tag during this as well as the gryphon herself.

Steps to reproduce the issue:
Talk to Cuckoo Lane and look to see if her name tag can be seen, it might also be based on where your pony is looking at the time. She should end up vanishing in the dialog also. 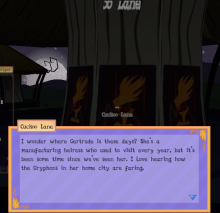