What is happening:
Eventually maybe around an 30 minutes to an hour later, ledger leaf at the bank will have actually moved quite a bit, just seems very slow.

What should be happening:
He should remain where he is dancing

Steps to reproduce the issue:
Look at where ledger leaf is at the beginning, then come back few minutes later without zoning to a new location or relogging, he should have moved a bit.

Screenshots:
He inside the cloud after some time. 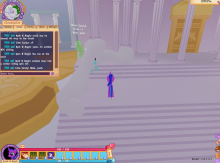 Never seen him do it again even after a long time.